Enemies in Horizon Zero Dawn are listed here. The robots that wander the landscape do so under their own ecological machinations, with their reasons not totally clear. They behave in a manner similar to animals in the wild, with herd behaviors present. There is a corruption that is spreading through the machines, marked by a black ooze. When corrupted, a machine behaves unpredictably, and is prone to violence.

Aloy will make use of various Weapons to subdue the machines. Machines can be restrained with a Ropecaster or traps, or brought down by scanning for their elemental and armor weaknesses. See the Combat page for in depth info on how Aloy can approach hunting the robots.

Aloy can also use her Override ability to hack the machines for her purposes, including converting some of them into Mounts.

See the Bosses page for the bigger story foes you encounter over the course of the Main Quest. 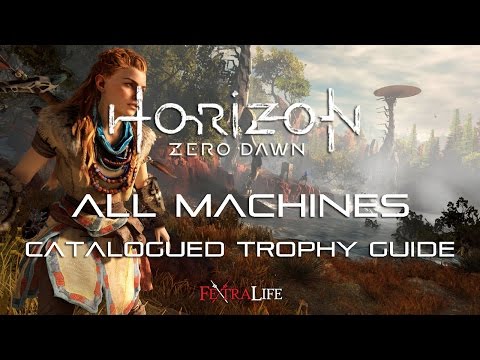 Chariot Machines are ancient war machines that have been excavated from the earth and re-awoken by the Eclipse.

Recycler Machines are primarily designed to assist sub-function HEPHAESTUS, breaking down destroyed machines and bringing the parts back to the Cauldrons to be reused.

Transport Class Machines are a diverse group, with one machine designed for the sole purpose of assisting Acquisition Class Machines move large amounts of cargo.

Recon Class Machines are some of the simplest machines, usually built around a single advanced detection component,  their purpose shifted to serving as guards and lookouts for other machines.

Communication Class Machines are a unique group, with the only known member being the Tallneck.

Often equipped with weapons, Combat Class Machines are unquestionably the most dangerous machines and are often seen among more vulnerable machines, likely guarding them.